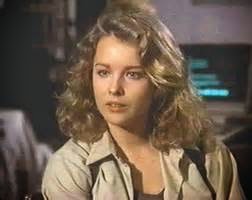 The wonderful Faye Grant as Juliet Parish of V
In the 80's (1983-85) there was this great miniseries called V.  V was about us, in modern day US, dealing with alien invasion under the guise of "we come in peace." It was also about heroes and the unsung freedom fighters, to which the first mini series was dedicated.  It was also about heroes and villains that arise in such times.  Some people we just look at on the street and would never guess if they would be a great hero in times of great darkness or a sniveling coward collaborator.  The main characters in the series and its sequels & short-lived but beloved show were not soldiers or beings with super powers.  They were just normal people who found courage.  A street kid, factory worker, teacher, journalist, cop, housewife, and more, became heroes when their world was threatened by alien forces beyond their imagining.
I know most of you are more familiar with the recent "reboot" of V, but check out the original two miniseries and show.  It holds up because there was decent writing.  I do not want to hear whining about the lack of fancy CGI effects.  It's about the characters.  One of my favorites in this series was Faye Grant as Juliet Parrish.  She was a main character who at first glance you could never imagine running a resistance, and doing scientific research and being a doctor, all at once.
Juliet is a great example of the unexpected hero.  She is this tiny little blond, and though smart (a med student putting herself through school on scholarships),  you could never imagine she could be tough enough to become a leader of the resistance.  Not even she could!  She was amazed and flummoxed that people, tougher and bigger than her, looked to her to lead them through the darkness.  She was brave in the ways that mattered.  A soldier will understand the trust you put in your fellow comrades at arms.  While stealing some lab equipment, the "visitors' opened fire on her and her companion.  These were advanced laser type weapons.  Her partner was mortally wounded.  She risked her life to drag him into her little car, even shot in the hip and in pain, hauled a man twice her size to safety.  She was not trying to be brave.  She was a soldier who refused to leave one of her own behind.  That was kind of hero Juliet was.  In the series, she was brave though you knew she was scared to death inside.  But she did what was needed.  She did not whine.   She was a hero.  And because of Juliet and her resistance fighters, they had V for Victory.
Next week, another great female hero.  Until, read more fantasy and science fiction.  And check out the original V!
Verna McKinnon
Posted by Verna McKinnon at 4:31 PM