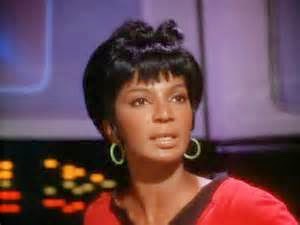 What can I say about Uhura of Star Trek?  Goddess of the Federation?  Yes.  Role model to all women?  How can you doubt it.  Iconic? Definitely.  Beautiful and smart?  Always.  Important to all women?  Absolutely!  Even if it took decades to officially give her a first name.

Uhura was one of my earliest influences when Star Trek first aired on TV.  Not only was she a woman and an officer, but she was on the bridge of a star ship!  That was cool.  She started out as a Lieutenant but advanced to the rank of Commander over the years.  Uhura was black and female-and portraying a professional women and an officer in an era that did not care to support or advertise women in powerful roles, much less women of color.  It is so important that she was not the maid, which was sadly the type of roles offered to women of color in that time.   Nichelle Nichols was also the first African American woman cast as a regular in a television show who was not in a menial role.  People take these things for granted now.  She was an equal in an era of inequality for women and race.  We love her because she not only gave women everywhere hope to be something more, but because there was warmth and humanity in her character as well, which sprang from the actress herself.  We love you Nichelle Nichols.

Uhura's character and the actress who played her deserves a galaxy of tribute.  Uhura was brave and stoic, but that was only part of her appeal.  Though she was Starfleet officer, she never lost an ounce of her femininity or her authority.  She was warm and caring.  There was nothing stereotypical about the character or the way Nichelle Nichols played her.  She was not the helpless female that TV so often shown on television.  Despite many sexist attitudes that existed in that time, happily Uhura did not fall into those same traps.  It is important that Uhura was in a respected position.  She did not just answer the phone.  As an officer, Uhura had people under her command and was a linguist of skill.   She was not just the wife or girlfriend of the space scenario.  Uhura's character was free of those stereotypes.  It was refreshing.

Perhaps that is why characters like Uhura are so important.  I never understood why women had to be portrayed as weaker or not as important.  As a young child, I did not care what color she was.   I never understood why it mattered, yet it did to society.   Another reason why Uhura was important.  I was also becoming aware, even at a young age how women were portrayed on TV.  These things bugged me and still do to this day!  I am weary of romantic comedies or dramas where a woman's life is not fullfuilled unless she has a husband or a baby.  There is more to life.  Uhura did not moan about boyfriends or wanting a baby to make her life worth living.  There are elements of that attitude that are still in force.   Tune into any show with a young cast, and there is a lot of stereotype and shallowness going on with female characters, or they are just the tough lawyer or doctor.  Or a mom.  Don't get me wrong, I respect moms.  They are important.  But the entertainment world is narrowing the focus on women and their place even today, forcing us to fit into little easy open character boxes that they can easily control so they can feel in power.

I do not like to be controlled, thank you very much.  I'll keep my power too.

I never knew about the difficulty Roddenberry and Nichelle's character faced until I was an adult.  Many years ago when I was in college, I  had the opportunity to see Gene Roddenberry lecture.  I was thrilled.  I learned a lot about how stupid TV executives can be.  He talked about the trouble he had convincing the studio to have a multicultural crew for Star Trek.  He spoke about how the studio executives insisted Roddenberry get rid of Uhura and that guy with the pointed ears.  So tragic and unfair how small minds singled out what became two of the most important and  fan favorite characters on the show.  It is a miracle Roddenberry saved Uhura and Spock from oblivion, but thank heavens and the alpha quadrant that he did!

Uhura was a strong women without martial arts or super powers, which makes her even more special.    There is a whole universe of possibilities, thanks to Star Trek and Uhura.  The courage of Gene Roddenberry fighting for her deserves a medal of bravery.  Uhura showed us that we can be anything we want to me-and that is what's important.  Uhura lived that dream.  The beautiful and talented Nichelle Nichols that played her gave us something very precious.  We must treasure that always.

Next week, a different heroine!  Until then, read more fantasy!  And enjoy some classic Star Trek.