Okay I need to address an issue that is vexing me.  First of all, John Carter (which should have been John Carter of Mars or similar) is no flop.  The ridiculous expectations of studios to reap back all of their production costs in 2 weeks is illogical and deluded.  Also they did not know how to promote the movie.  I know the studio's base is suppose to be fantasy based studio-but I personally think they do not understand anything beyond kid cartoons and fluff.  John Carter was based on Edgar Rice Burroughs Barsoom series, the first of which was written a hundred years ago-literally.  No one knows or understands today that John Carter comes from that.  Disney needed to promote that and use that as part of the ad runs.  Other than meager clips you got nothing what the movie was about.  It is a great movie.  Disney (I believe) hates real science fiction and fantasy literature-look what they did to the Black Cauldron years ago?   Now we are expected to dump any interest in John Carter and just move on to whatever lame new movie Disney is doing.  It is bad enough they have softened the fairy tales, but now they have something great they are not even trying to save.  Movies need time sometimes, especially when people foolishly think it is a Star Wars rip off not knowing that if anything, these stories fed the ideas of a Star Wars to Lucas.   John Carter is true imagination and adventure.  I loved it.  The leads were great!  The special effects awesome!  I love classic science fiction!  Shame on you Disney!  You produced some fun and quality and you are not giving it a chance.  I want a decent science fiction series on film and there has been none in years.  This was my last hope and you are dashing it.  I do not want to see the Avengers, because studios have been ruining comic book heroes for years.  Brave is kid stuff though it might be good, but not heart thumping science fiction.  I want my science fiction adventure!  LET ANOTHER STUDIO HAVE THE RIGHTS AND RELEASE ALL TALENT TO A STUDIO THAT IS COMPETENT TO REAP MONEY OFF A GOOD SCIENCE FICTION FILM!   Go back to ruining the fairy tales!  Disney why did you fail John Carter?  Did you get so bogged down in focus groups and trying to soften what the film was and you are to blame?
Posted by Verna McKinnon at 7:57 AM No comments:

Fantascicon in Georgia! See that's my editor Joe Dickerson and my book 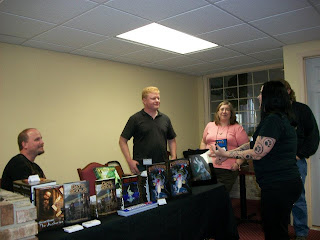 My editor Joe Dickerson (sitting) showing off and hopefully selling copies of my book @ Fantascicon in Dalton, Georgia recently.    Looks like it was a fun convention.  I hope he sold lots of copies.  Hi Joe!
Posted by Verna McKinnon at 11:53 AM No comments:

Okay, I do plan on seeing John Carter, which should have been titled "John Carter of Mars," or "Princess of Mars."  I heard via rumor that Disney did a poll and said that women would not see a movie called John Carter of Mars.
Disney- get a grip.    In fact, all movie and TV studios, stop over doing the stupid focus groups!  They are lame.  Those focus groups would not have liked Star Wars or Star Trek either-and look at the money makers those were?  I am miffed that this was not John Carter of Mars, or any of the possible cool titles that Edgar Rice Burroughs created.  Yes, this is something from the wonderful age of classic science fiction/fantasy pulp era where imagination ruled, that same age that spawned HP Lovecraft and Robert E Howard.  A friend recently commented that John Carter sounded too much like John Connor (from Terminator) until I pointed out these stories were much older (first of which was written in 1912 under Barsoom series which was what he called Mars-long before Terminator.)  My friend was shocked and I directed him to the library to check out Edgar Rice Burroughs.  Disney-you did not poll me did you?   I am tired of people trying to water down fantasy and science fiction.  Soft science fiction and fantasy is being coddled while great stuff that is meaty is left in a corner gathering dust.   Stop the insanity!   Embrace the imagination.  That is my motto.
Back to writing.