The new novel in my series, Tree of Bones, A Familiar's Tale, Book 2 (published by the fantastic Sky Warrior Books)  is available on Kindle and through all the normal channels. I have only one review so far (but it is 5 stars-thank you.)

If anyone has read and liked my novel, please post a review on Amazon. It is the kindest thing you can do for an author.

Am deep in the creation process on other projects. One of which is a heroic fantasy where the heroine is the core focus of core. Heroines rules my words. I cannot reveal much about the novel of course, but the lead character's name is Sabine Fable.

I have submitted my final book in the Familiar's Tale trilogy to my publisher (Fires of Rapiveshta). It is odd to have the tale completed. I will miss my characters.

More exciting is on the horizon as I hear about release dates for my other books. Until then...read more fantasy!

I want to thank all my friends and fans for their patience in the release of my second opus in my trilogy. This is the wonderful cover art.

This is the wonderful link to pre-order my novel!
http://amzn.to/2gLskIg
More to come. Hugs and chocolate for all!
Verna McKinnon
Posted by Verna McKinnon at 3:17 PM No comments:

Fires of Rapiveshta done and other insanity.

Just a quick update about Fires of Rapiveshta, the 3rd and final novel in my Familiar's  Tale series. It is done. Complete at 104,000 words and submitted to my overworked publisher at Sky Warrior Books. I finished in early June, but my brain was so spongy after months of intense writing, which was made easier by a friend who is a darn good editor with a practical eye.

I am looking forward to the release of Tree of Bones, the 2nd novel in the series. I have seen the preliminary cover art and am excited.

Currently, I am recovering and organizing my next writing projects. I have several in mind. Until then, read more fantasy! 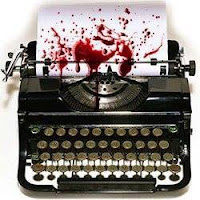 I have reached the 50,000 word mark in Fires of Rapiveshta. Am on a roll and need to keep the momentum cranked up. I am about halfway through novel. So I will not be posting for at least 2 weeks. Think of me as I feverishly type the fates of my characters in final book of the Familiar's Tale trilogy. I will also be off social media for 2 weeks. Can I survive?

I will be living on coffee and chocolate. And mashed potatoes. Sorry, but I am hungry and it's lunch time. I love this stage of writing. It is a mad rush as it all flows. I try to imagine I look like this:

More to come. Stay tuned. Until then, read more fantasy!

Heroine Julian Crane of "The Man in the High Castle"

As I write about heroines and their importance, it is worthwhile to point out someone new and exciting. The character of Julian Crane in the series, The Man In The High Castle, is definitely worth noting. I have watched the 2 seasons on Amazon, and am thrilled it has been renewed for a third season.

The series (based on the science fiction novel by Philip K. Dick) is set in 1962 in an alternative timeline where the Axis powers of Nazi Germany, Imperial Japan, and Fascist Italy, won World War II. Life in this America is not pleasant or safe, no matter where you live. The west coast is controlled by Japan, the east coast Nazi Germany, and there is a neutral zone in the middle.

Juliana Crane is a heroine of great substance, though not in the usual tough girl format. Wonderfully played by Alexa Davalos, she is a soft spoken woman who loves her family. She is trying to survive in a world where life is cruel and can be snuffed out on a whim. When her sister goes missing, she does everything to find out what happened to her, connecting her with dangerous people. It send her on a deadly path where even the so-called good guys (resistance fighters) cannot be trusted. Juliana makes mistakes along the way. She wanted to find her sister and give her justice, which doomed her to be used. She does not actively betray anyone, but her compassion and mercy endanger her.

That's the thing. Her compassion is what makes her a great heroine. Not her fighting prowess or if she can shoot or blow things up. She wants freedom, but is not willing to do anything or hurt anyone to achieve it. People hated and judged her for it. The man in the high castle (the one behind the Resistance & the films) did not want her killed when she failed to kill a target, but the hotheads who had her in custody were just as bloodthirsty as their oppressors. They try to kill her, but her fortitude and drive save her. She escapes to Nazi America with both Resistance and Imperial Japan in pursuit, trying to survive again, and being used by the Resistance-again. She does not like the Nazi's anymore than her life in San Francisco. The Resistance use her but do not forgive. There are people who knew her and loved her too, who see her gentle strength as something great.  But they cannot help her. She mus save herself.

"The man in the high castle," an enigmatic man with control of the strange films people covet (will not explain here-watch the show) understands her importance.  He has seen her impact in every version of the world and knows why. Her compassion makes her special. She is the hope that binds in the mysterious films. Her kindness is not only the hope of the world, but an change the fate of the world.


Posted by Verna McKinnon at 1:15 PM No comments: