I get very weary of hearing that phrase "shaking things up."  This happens in both books & TV, where they decide to kill off a character or break up a couple for example, because shaking thins up is supposed to create more good conflict or excitement.  But sadly this is never the outcome I usually experience.
It is a cheaters way out.  An "I have no good ideas so I am going to kill off a character."  It is annoying and stupid.  I never feel a shake up.  I just feel pissed off and stop reading (JK Rowling-you killed Hedwig!) or stop watching (Family Guy is dead to me).
The point is, unless a characters death is meaningful or drives the story, death is a cheap tool.  There is also a very twisted point of view out there that is a character's story is done, they kill them rather than let them ride off into the sunset.  There are a number of TV shows I have just stopped watching because of this.  Death must mean something in a novel (or TV show or movie), else the emotional feed turns sour.  Yes, we can have our hearts broken over Romeo & Juliet, but their deaths were necessary to the story.
You can create conflict and shake things up with good storytelling.  That is why, using a TV show as an example, Doctor Who rocks.  They have created more heartbreak and shaking things across the galaxy without killing off key characters.  They are lost in other Universes, are forced to lose their memories to save their lives-but they are not killed.    From a novel series, I love David Eddings.  His Belgariad and Mallorean series are often reread by me.  There are many characters but they are not a kill list.  He rarely kills off characters unless it is necessary to the story.  Sure, you always want to see the bad guy die-and they do- but the protagonists suffer so many trials and traumas, death is not needed.    I love George RR Martin, but his death counts are frightening.   I am sure he has a reason, but the journey there is rocky.    I often need a break from good ole' George.  And a shot of rum.
So do not cheat your readers (or audience).

Where are the Slayers & Heroes?

Yes, it is rant time.  I am miffed not only by the weak barely there fantasy and science fiction not only on TV & in the movies these days, but the premises & protagonists for  these vehicles.   Finding good shows is hard.  Finding a real hero is tough.  Strange for an era with a zillion cable channels.  Now I love witches and the best witch themed show to date was Charmed.   It showed good witches fighting evil and saving innocents  But the show is gone now and left to DVD watching.  I am not so sure about the other witch shows.  I loved Buffy-a vampire slayer who killed demons and saved the world in each season finale.  It was also the only vampire love story I could accept.  The brilliance of Joss Whedon structured the vampires in his world to be soulless, and inhabited by a demons.  Angel was cursed with a soul and that made a huge difference.  So it worked-and even so that romance had to end.  I forgive Buffy about Spike because she was clinically depressed at the time.    Another example is Xena, who had fallen into being evil, was redeemed by Hercules (another fun show) and fought for the good to achieve redemption.  Sometimes silly but a great show.

My point is there was a strong line between good & evil.  We had heroes fighting for the good and smacking evil good and hard.  Now we have vapid girls with too much eyeliner falling for vampires and making them the focus of the shows or films.  I miss the days of real science fiction and fantasy.  Babylon 5.  Crusade and Firefly (may they RIP).  Buffy.  Stargate SGI.  Stargate Atlantis.  Star Trek (take your pick of fav show).  Now we have Vampire Diaries & The Originals-let's make people that would serve us at brunch as the protagonists.  I do not want to root for vampire kings.  I want to root for the slayer that turns them into dust.  We have soft scifi that is barely there.  I do thank the TV gods for Once Upon a Time-achieving fantasy storytelling with contemporary flip on one side.  It is similar to what Stargate achieved with their Stargate tech find on contemporary earth, but thanks to the gate alien technology, we had them traveling around the universe and having epic space battles with evil aliens who want to enslave us.  Plus the show gave us one the greatest science fiction woman heroes ever-Amanda Tapping as Colonel Samantha Carter.  A real role model for women.  She was the best!  We have Canada and Britain to thank for the rare great science fiction/fantasy shows.  I thank the heavens for Doctor Who.  Not only is he great but the women characters rock as well.   And the new Orphan Black-wonderful.  A flawed women pushed into being a heroine (main character Sarah) and use of cloning to make an intriguing contemporary science fiction.  The actress is so brilliant-playing so many different versions of her clones she must feel like Sybil at the end of the day.  Lost Girl has an interesting heroine and they crafted the show carefully.  The careful detail on Fae and them not being demons, but an evolutionary race predating humans is important.  And I love Anna Silk's Bo.  She is truly out to do good and help humans, despite the chaos around her and the rules of the Light & Dark Fae (and her need to feed on sexual chi).  It is a tough balance but they make it work.

Sadly, the good is too rare.  Much of what is out there now is weak and promotes the demon/vampire characters as acceptable focus.  There is a difference between flawed past and grey vs. dark and evil.   There is no real science fiction anymore.  Not really. The Tomorrow People is too silly to talk about-pretty teens with super powers.  Snore.  Under the Dome?  Blah.   Even SyFy's Defiance I have issues with.  Aliens came to settle on our world and whether they meant to or not, their technology destroyed the earth's ecosystem, and many of the animals died with it-and us as well.   Do not tell me their tech did not have ability to check if planet was already inhabited!   I cannot find them sympathetic.  But folks were excited to see some real science fiction again with aliens and some effort.  I cannot blame them.  I also miss Fringe.  Great characters-flawed but heroic.  But the show went as far as it could and ended well.  Falling Skies is good-but there is a depression with these shows rather than a heroic fight.  The original V had the heroic bravo that balanced the darkness.  You need to root for something along with people afraid.  Legend of the Seeker was great!  Real fantasy!  Great characters fighting for good in a secondary world.  Axed at end of season 2.  Sad now.

I guess for me there is not enough of a balance.  The good science fiction or fantasy shows are rare and often  axed too soon by greedy TV execs.  Yet they happily renew Honey Booboo .  And people wonder why I am miffed.

Posted by Verna McKinnon at 10:09 AM No comments: 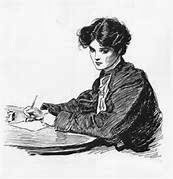 It is autumn and the leafs are falling and the nights have gone chilly.  Fall & Winter is a great time to write.   The cold brisk air, drinking hot coffee or cocoa, thoughts moving inward, staying inside more often.  It is ideal writing time.  Some people moan the loss of summer.  I do not.   My creative side wakes up.  My characters demand time and attention.  And summer will come back again.  Life  and its seasons revolve.

I am working on my novels and hoping that 2014 will be a better year for me as an author.  I have hit a lot of bumps trying to get things done.  Well, more than bumps.  Monstrous giant obstructions barring my literary progress like that mysterious black monolith in 2001: A Space Odyssey.

But I will prevail.  I will not give up or give in.  Being Irish/Scottish, my stubborn streak is fully embedded in my DNA.