Hello Familiar Friends,
Revising a novel is a complex beast.    I am currently in the process of revising a new novel which is more intense than just editing for grammar boo boos.  I have changed some key elements in my story, and though it better and stronger, it also meant going back to rewriting some earlier chapters.  It is exciting and also tedious.-much like the life of a writer.  It also changes where the novel was heading.
I have been through this before.  When I was submitting my first published novel, Gate of Souls, I went through the same thing.  The book was good before, but the major changes I made, which there were many, for adjustments and relationships of characters, structure of the my story, deleting certain characters which were dead weight, adding new, shifting how I did things, etc.,-it was insane.  But it made my novel better and the story was stronger.  I went into power mode and revised a 100,000 word novel in less than 90 days.  Did it hurt? Yes.  Did it make me dizzy?  Yes.  Was it worth it-YES!
When going through this process, whether it is taking a fully completing novel (like Gate of Souls) or one that is only half-finished, is a challenge and a pain in the ass.    Often excessive amounts of coffee and chocolate chip cookies are involved .  But let's face it-as writers this is expected as part of the creative process.  Our initial gem of an idea has a beginning we gleefully put to pen, but often it must go through a lot of cutting and polishing before it becomes a flawless diamond.    Change happens.  If you become stuck or blocked, there is a reason and it is not the "writer's block" so many of us use as an excuse.  It means there is a problem with the novel that needs fixing.  Once you accept this cruel but necessary fact, you go in and figure out the problem.  Sometimes it is a character dragging you down that needs to be sent to the dead character graveyard.  Sometimes you must add a character.  I did that to my current and it changed how the book flowed and centered its focus.  It gave my main character a foundation for being where she needed to be.  It also changed her relationship with another character, but that is okay-because what is happening is better and more exciting.  It also gave some challenge to my main character.  It not only pushed me passed my comfort zone, but it pushed my character passed her comfort zone too.  My gem got some polish.
So never fear the changes.    It may hurt and make you sweat, like a P90X workout, but you and your story will be stronger for it.  You will have written a better novel.
More later.
Verna McKinnon
﻿

Posted by Verna McKinnon at 9:38 AM No comments:

The Sin of Synopsis

If there is one side of writing that vexes me, it's doing the novel synopsis.  I am great at building worlds, creating lively characters, doing mini synopsis like a teaser in a cover letter, writing novels & short stories.  But the dreaded synopsis makes me cranky.  I always fret about doing a condensed version of my novel.  It makes me rather wolfish.   I struggle and whine.  The synopsis must also be full of life and texture, yet fast to read.  It must be the hook that captivates the editor's eye and make them salivate for more.   It is hard because you do not know where your masterpiece is going.  You often never know the editors and are at the mercy of a volatile publishing world.

Writers, unless they have made it and have regular agent or publisher, have to sell their work without any real contact with their potential editors, agents, and publishers.  It's like a great big mystery lottery with dark gods in shadowy cloaks laughing as they crumble your pages of hard work and toss them into the cauldron of doom.  Actors and singers audition and see the faces of the their judges.   Even artists have contact with their galleries and such.  But writers suffer a different fate.  We have many hoops to jump through and do them blindly with only vague hope, an address, and a postage stamp.

But I did it!  I finished my synopsis.  I managed to condense my 100,00 plus word novel into a 6 page synopsis.  Will be going out to a mystery publisher soon.   Wish me luck that the acquisitions editor is in a great mood and has had chocolate that day.  That reminds me- Happy Valentines Day, even to you mysterious publishers and editors.

Am on a quest to finish the Bard Maiden of Rhulon.  My fantasy adventure is now at 58,273 words.  That is about halfway through the novel.  Why is that important?   Words counts are guides and also a celebration of how far you have come.  I also added a new character and revised another character that was already in my compendium but has not show up yet.   Things change as you write.  Often that is a good thing because your story is evolving and you need to be open to that.  So I have made a significant goal and will continue on to finish.

Change can be beneficial as you write and not everything needs to be set in stone when develop your novel.   You have a foundation, which is important, but creativity never sleeps.  I cannot tell you how often a new character popped up as I wrote a chapter or a direction for my characters or plot changed that actually made things better.  So go with the flow.  It might be wonderful.

Also heard from my publisher Joe at Aberrant Dreams.  He is feeling very positive that my 2nd novel in my Familiar's Tale series,  Tree of Bones, could have an April/May 2014 release at last and we have a new artist doing cover art.  It will be on kindle as well as hardback from the start.  There will also be specials going on so stay tuned.


Posted by Verna McKinnon at 2:22 PM No comments:

The Agony and the Editing 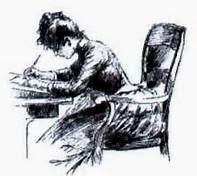 Have been on a roll-writing wise.  Am more than halfway through writing solid draft of Bard Maiden of Rhulon.   Am on the infamous chapter 13.  It is infamous for me because a lot of stuff has to happen  in next couple chapters.  Yes, there is a blood and chaos.  And some personal struggles for my heroine, Rose Greenleaf.  Am crazy with ideas and some things have taken a different turn in the story.  I now know exactly how the first book in this trilogy will end.  And it will lead her into even more fantastic adventure and intrigue.  Sadly, I must keep it to myself unless you are a publisher who wants to acquire my literary tome- then I will talk.

On another note my publisher has contracted a new artist to do the cover art for Tree of Bones, book 2 of my Familiar's Tale series.   Am anxious and eager for this book to be released.  Joe-let my book be released!

More to come.  Read on my friends!  It is good to be literary.
Verna McKinnon


Posted by Verna McKinnon at 2:54 PM No comments: