I have entered the evolutionary state of creating a new novel.   My personal big bang.   I have polished my copy of Bard Maiden of Rhulon.  Now I am moving on to Blood of the Unicorn.  That involves a lot of work and the painstaking new mind set.  It is not just a simple template of a new novel with new characters that I build a book on.  A fresh novel takes a mental adjustment  New characters with fresh and often painful or wicked histories, different worlds (I am addicted to doing tales in a secondary world), new landscapes and kingdoms.  There is a bonding process when its all new that is often tricky.  It's odd at first.  You are working with strangers, essentially.  You make notes and character profiles, but they are not developed in your mind yet.  That comes with the writing.  For me, the characters tend to evolve as I write, which brings a number of changes to the characters and story even as I go.  No matter how much preparation I do, things change.  It is mentally painful and fun at the same time.  I go through the process of thinking of names and titles, do character profiles, etc.
But when I begin to type-the story or characters change in various ways.  They morph.  My thought process shifts.  Often this has been good.  I have created some great characters that way-ones I never even considered.  They sort of jump at you in a your literary mind  with the stubborn tenacity of a bulldog.  Darcus from Gate of Souls was like that.  Unexpected.  Determined to stick around.  He was initially going to be a one shot character to get my main characters from location A to location B, and probably die in the process.  But when Darcus and Cathal began to verbally spar in that first scene, Darcus became a permanent character in the tale.
So I face these challenges-the first 3 chapter easy flow, the barrier of panic, the battle to move beyond chapter 3, drinking too much coffee or tea, snacking on chocolate chip cookies as I compose more changes, spellchecking, forging ahead, buying more aspirin for the headaches of creation, getting stuck around chapters 8-10 before the dam breaks and I become a manic writing machine.  It's my process.
Such is the life of a writer.  Do not envy us.  We suffer.  We are cranky.  We are doomed.
More later.  Until then, read more fantasy!
Verna McKinnon
Posted by Verna McKinnon at 9:50 AM No comments:

There is a transition on shifting from writing one novel to working on another is hard.  I finished Bard Maiden of Rhulon and also completed a  thorough polish edit on the novel as well.  Along with sending out queries to agents for my book, I should be roaring to go to work on my new novel endeavor-Blood of the Unicorn.   Sadly, my energy level is in a slump.  I cannot seem to activate.  I would like to add that I do not believe in traditional writer's block.   I do believe in fear and panic, however. 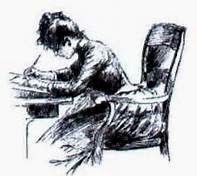 I have all the basics.  A template of the new world and characters.  I even changed some names to spice up things.  I have a synopsis and outline of story as to what new novel should be.  I have my pretty new folder with my notes and character grid.  Why can't I move forward?  Do I miss Rose and Meg? (my main characters in Bard Maiden of Rhulon).  My ability to shift is unusually difficult.   ARGH.   Also, I have given up Starbucks on a daily basis for summer.  I cheated only once.  (sue me-I am weak human)  But I miss my caffeine infused lattes of happiness.

I wonder if it is because of the theme of this new novel.  The story is darker than usual.    The world and characters are in a grim place.   My main character Brona is born in the first chapter and the events around it are tragic.  She is not yet developed, just a newborn baby marked by a curse and a blessing.  She is a stranger to me.  My other characters in other books, like Runa, Opaline, and Meg and Rose-are fully formed best friends.  They are my literary sisters that I bond to.   Brona is distant, and maybe that is what I need to overcome.

Posted by Verna McKinnon at 12:16 PM No comments:

Shame on the Emmys

Once again I am reminded why I have stopped watching any award shows, especially snobby and pretentious US based award shows (Emmy, Oscar, and others) because they often neglect to nominate people or shows truly worthy.  Though I am always tickled with joy to see Peter Dinklage nominated because be is a truly great actor, most of what the Emmy awards nominate are basic bland shows.  If it is about a serial killer or politics or drug dealing-they accept that fine.  Their idea of edgy is to reward a show about a guy making meth.  I do not care how good the so-called writing is.   I have no interest in watching a show where the bad guys are central focus and the main protagonist.  Everything the academy votes for is general bland drama like lawyer shows and period dramas with corsets.   Now I did live Downton Abbey.  That love ended in season 3 finale.  There is no point in watching it anymore.   An actor wants to leave and they kill him.  Now I simply so not care.  There rest in the nomination bowl are so expected and typical-Scandal and True Detective, and Homeland.   Snore.

What gets me is the prejudice.  None of the actresses nominated for best actress in a series can hold a candle to Tatiana Maslany in Orphan Black.  But it is considered science fiction and therefore not worth the effort to nominate. 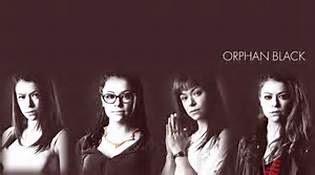 Yes, the awards have a unwritten law of prejudice against science fiction and fantasy.   They proved it again.  An actor can be the greatest in the universe but if the part is science fiction, they tend to pass them over.  Game of Thrones does not count.  It is barely fantasy anymore.  It is a big HBO investment and has been reduced to being about royal serial killers with lots of unnecessary nudity, extreme graphic violence, and very few redeemable characters.  I love Tyrion.  I love Arya.  But they are outnumbered by the morose depressive and exceedingly confusing story with elegant costumes and heavy political bloat that would float a blimp.  They will probably die so what is the point in investing in watching just to watch another character I like die (in a gruesome manner).

But my salient point is they overlook people based on the genre of the work.  it is not about art.  It is a money making nomination for studios involved and it is basically all about the numbers-not the talent involved.    So I will watch my shows and root for them.  That is all any of us can do.