Heroic Women of Speculative Fiction! This week it's Kathryn Janeway! 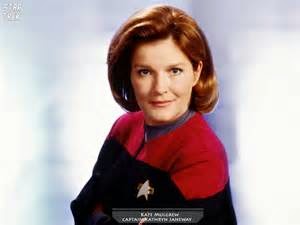 Captain Kathryn Janeway
Yes, I admire Captain Kathryn Janeway!  In fact, I love this character and the actress who played her.  I have recently watched all seven seasons of Star Trek Voyager, and my opinions have changed about the show.  I admit, I was not into the show as much when it first aired, but I feel like Star Trek Enterprise. it was underrated.  Also, I do not feel that Captain Janeway gets enough respect.  This woman, this officer was brave, selfless, put the needs of others above her own, and was willing to die if necessary for the greater good.   She had crap to deal with other Star Trek captains did not: like being catapulted into a different part of the galaxy without a compass, dealing with a shipload of cranky Marquis, hostile aliens who never heard of Starfleet or cared,  and no way to call home for some backup.
But this woman not only got her crew home, but in the process of the show's seven year run, she and her crew catalogued massive scientific knowledge about the Delta quadrant and its mysteries, made new discoveries,  fought major battles (again-no backup for poor Kathryn) with rude and often advanced aliens, including the Borg.   She also had to deal with Neelix's cooking and his experimental recipes.  I wonder if she had to replicate antacids much?
Captain Kathryn Janeway was an officer and a scientist.  She was savvy, smart, unrelenting, and yet full of compassion.  She would defend her ship and crew with the tenacity of an angry she-tiger and not hesitate to vaporize you if you crossed the line.   Im many wat, she was more of a cowboy than Kirk ever was.  Kathryn could also be funny, she loved dogs, and was unlucky in romance, like most heroines.  She was not a twenty-something.  Thank heavens!!!  She was a real woman who spent years training and was age appropriate for her role as Captain.
So let's give this woman and officer some respect!
Next week, it's Christmas, so I will not post a new entry in my Heroic Women series until after New Year.  I will be too busy recovering from rum-spiked eggnog and too many chocolates.
Until then,  Happy Holidays and watch more fantasy and science fiction.
Verna McKinnon
﻿
Posted by Verna McKinnon at 12:51 PM No comments:

Heroic Women of Speculative Fiction #8: Eowyn of the Lord of the Rings novels & films

Eowyn of the Lord of the Rings novels & films
This week's wonderful heroine in my series covers both literature and film.  In the novels, she was barely touched on until needed, but sill left a solid mark.  In the films that Peter Jackson so brilliantly directed, he gave Eowyn the just attention she deserved.    I mean, really, this woman faced down the Witch-king of Angmar, Lord of the Nazgul!  She destroyed the Witch-king, nearly at the cost of her own life.
Never under estimate a woman.
Eowyn, a most females in heroic fantasy of old, chafed against her role as woman.  She was a warrior at heart and did not need coddling.  A shieldmaiden longing to follow her call into battle.  She feared the prison of her sex, for it kept people from seeing what she really was.  She  was more than a Princess.  More than a niece to King Theoden.  She was a woman who longed to become something special.   It was her destiny.
Eowyn became special, as her deed was part of the prophesy to destroy the Witch-king.  No one, no one at all, suspected she would be the one to do it.  She did this at a great cost.  She dressed as a man and went into battle in secret, as many a warrior maiden has been forced to do in the past.  She faced the battle that was her destiny-the Witch-king of Angmar.  It nearly killed her, yet she faced it with bravery and grit.  Eowyn destroyed the Witch-king, and suffered terrible injuries from it.
None of her male characters recognized her gifts or seriously considered her desires, despite her shieldmaiden status.  Along with being generally disregarded, she endured a lot of grief too-including the attentions of the grimy Wormtongue when she tried to protect her uncle the king. You know she kept things running as best she could for the greater good.
After Eowyn's victory, Tolkien magically transformed Eowyn with his mighty pen after her heroic battle with the Witch-king into a simple princess again, content to heal and be peaceful.  She was given a noble husband and sent off to domesticity.  No longer seeking the glory of battle, Eowyn was content to remain in the background now.  That irked me.  She fulfilled a great prophesy-yet no one seemed to acknowledge it.  I am sure Tolkien made knit something too.
I acknowledge Eowyn-a great hero of a legendary fantasy saga.  Double acknowledgement to Miranda Otto for playing her so beautifully in the film versions.  She was the perfect choice.
More next week.  Until then-read more fantasy!
Verna McKinnon
Posted by Verna McKinnon at 2:20 PM No comments: 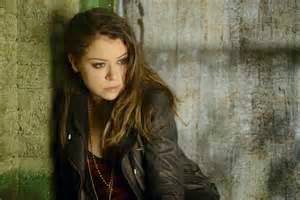 Sarah Manning, played by the mega talented Tatiana Maslany
Reviewing Orphan Black's characters, particularly Tatiana's multi-faceted performances as  its vast basket of heroines and villains, is hard.  As Tatiana portrays the many clones in the series, I will just have to take one clone at a time.  So for this entry into my heroine series, we begin with the first clone we see in the series, Sarah Manning.  (Is anyone else salivating for season 3-I know I am)
Sarah is a complex character.  A true anti-hero in many ways.  She was not evil, but at the start of the show she is a mess.  She is mixed up with bad things and bad men. She wears tatty punk t-shirts and heavy eyeliner.  She pretends to be someone else ( tragic suicide clone Elizabeth Childs) to get some money and a place to sleep.  She is drifting through life and snatching for bits and pieces.  Sarah has a daughter that she loves, but she did not take her when she took up with one of her low-life beaus and was gone for 10 months  Some may have called this neglect, (Alison was quite vocal about this) but after you meet Vic, you also realize that no matter how messed up Sarah was, she was never going to expose her daughter to him.  Despite her vagrant life and flaws, she is devoted to those she loves.  She is scrappy and a quick thinker.  Her skills, never really challenged in life, are finally tested when she entered the circle of the clones.  Her strength and thinking expanded.  Do not back this woman into a corner, because she will fight back with the resilience of angry lioness, especially if you try to hurt her daughter, Kira.   The danger she faces from everything around her only makes her stronger.
Sarah is accidentally thrust into the role of heroine.  She never tried to be one.  She just tried to survive.  Over the course of the first season, Sarah Manning evolved into a first rate hero, putting her petty drugged-out & grifter lifestyle deep into the past as she became embroiled in the mystery of her fellow clones.  She changed for the better, stepping up to protect her clone sisters and her family.  This was not just because she decided to give Alison back her 70,000 dollars, which at the time was Sarah's escape money.  She stayed because it was right.  Sarah, who always seemed to be close to her foster brother, Felix, reforged their relationship and the two could not be closer if they were blood related.  Sarah developed a new bond with her daughter and the equally mysterious, Mrs. S, who was Sarah's foster mother and protector of Kira.
Instead of running away in anger, as she had done her whole life,  Sarah oddly found an emotional home as she bonded with her clone sisters.  She thrived on the conflict and danger.  Her character, which was so flawed and scuffed by inner turmoil in the beginning, evolved into that of a stalwart and true heroine.  She worked to unravel the secrets that threatened them and developed skills as a leader and warrior in the process.  Sarah began as a leather-clad punk wreck at the start of Orphan Black.  Sarah was lost, as so many of us are.  In the terror of her new life, instead of running she found strength and compassion to stay.  Like a reluctant butterfly, Sarah emerged from her punk leathers and became who was she meant to be.  Sarah fights for the good and for her family now.  That's why she is a hero.
Next week, another entry of my heroine series.  Until then-read more fantasy!
Verna McKinnon
﻿
Posted by Verna McKinnon at 9:59 AM No comments: